So many things to do in Riga!  We even managed a couple of day trips from Riga as well.  Here are a few of our favorites!

Walking was our preferred method of getting around town because of the beautiful paved paths for both pedestrians and bicyclists.  It was less than a mile to Old Town Riga from our apartment with 4 different trams running almost at our apartment’s door step.  Sometimes we would just walk!  Take a look at these photos from our first full day in Riga – sunny and warm (if you call low 70’s as warm). 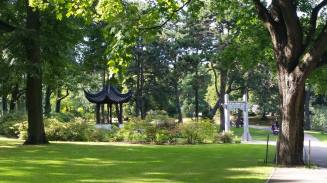 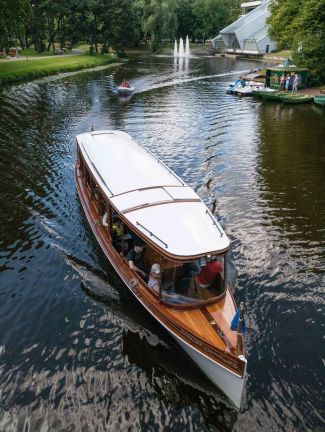 The biggest surprise in Riga was our visit to the Latvian National Museum of Art.  We didn’t know a lot about art from the Baltic region.   I discovered an artist that I love, and truthfully had never heard of before. His name was Janis Rozentāls (1866-1916). He was one of the first famous Latvian artist who achieved success outside of Latvia in both Russia and France. He was born in Russia but moved to Riga when he was 15. Check out some of his paintings! 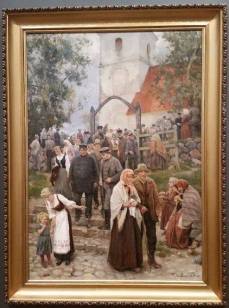 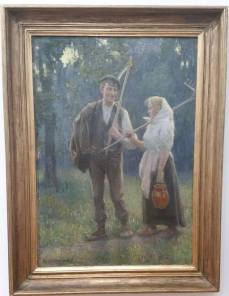 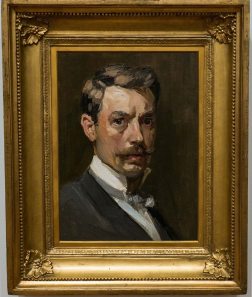 The museum building was built in 1905  It just underwent a major renovation and is absolutely gorgeous. Inside you witness the development of art in Latvia, the Baltics, & Russia from the 18th century until now. That lovely man below in the lobby of the museum is Clay. 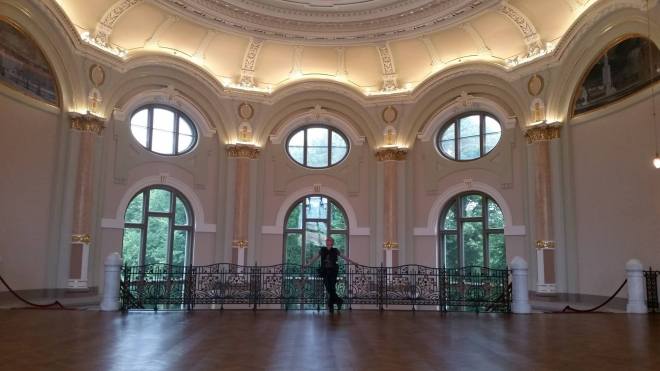 We had a sunny day to cruise around the Art Nouveau section of Riga.  These people were seriously nuts.  There’s decoration on every part of the buildings, including the bottoms of the staircases and the glass in the windows.  These are just two examples, but about a third of the city center is done in this style.  Later after visiting more areas of Riga, we learned that this Art Nouveau is not just in the city center, but in the suburbs as well.  Stunning.

Riga’s Central Market is nothing short of amazing. Not only is it the largest market in the Baltics, but it is the largest market in Europe! The main structures of the market are five pavilions constructed by reusing old German Zeppelin hangars. (see aerial view). Each hangar has a specific market for example the fish is all in one hangar, meat in a separate hangar, etc. Behind the hangars are yet more veggie and flower markets. 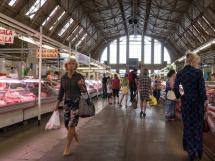 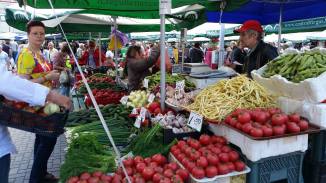 While at the Central Food Market later in the week, we had a delicious lunch at a local pelmeni (ravioli or dumpling) restaurant in one of the hangars. The pelmeni is not traditional Latvian food we learned, but Russian. It is served in many places across Riga. This one had a Trip Advisor “stamp of approval”. Maggie and Clay agreed.  I had the meat (beef and pork combo) pelmeni, and of course how could I pass on cold beet soup. It was full of chopped cucumbers, green onions, & celery. (next to the last photo) Regardless, it was delicious.  Clay had the cheese pelmeni and lamb soup (last photo).

Took a field trip to the beach community of Jūrmala.  It was about 68 degrees and the water was 61, so no swimming for us, and not many other people, either. Still a nice trip through the countryside to a pretty place. Maggie had a traditional Latvian lunch: Perch sausage with gray peas (which weren’t gray, but so dark brown they were almost purple). No food pictures today – we gobbled it all down as soon as the plates hit the table. 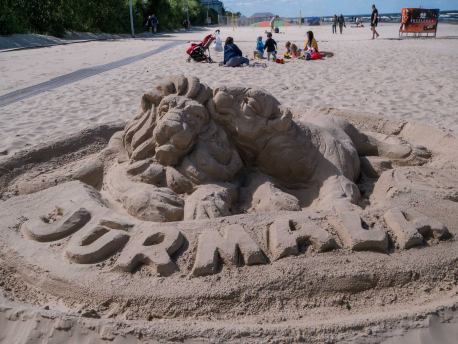 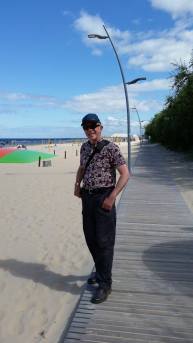 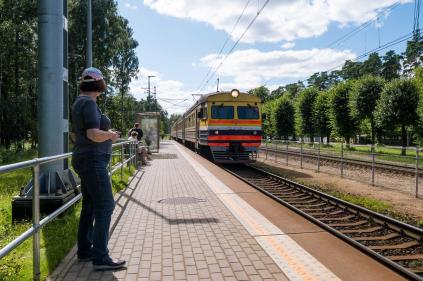 Day trip via bus to Cēsis (population 18K). Cēsis is known for their Medieval Castle, We arrived mid-morning, and headed straight to the visitor center to get a walking tour map. We decided to see the Medieval Castle, after we had a nice long walk and lunch. Attached are some photos from our walk around the city. Tuesday was a perfect day to go because few tourists and sunny & high 71 degrees.

The hilltop Russian Orthodox church of Transfiguration (above), which the von Sievers built at their family cemetery (like many Germans on Russian service they converted to Orthodoxy)

The next photos we saw on our walk were of the local kindergarten on left, and St. John the Baptist Church on the right. 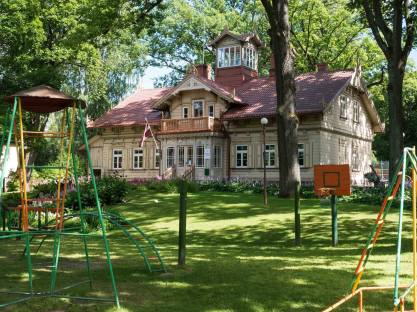 After lunch we headed to the 12th century castle which is the #1 reason tourists come to Cēsis.  It was fun taking a lantern through the dark places and trying to not use our cell phone. 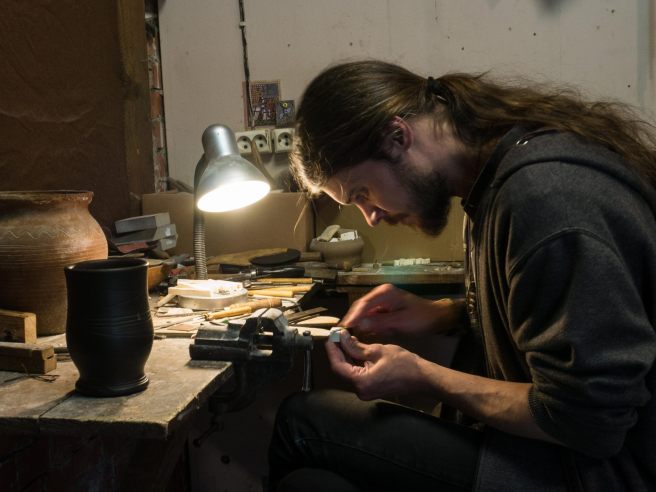 The young man above was making a die, using techniques that predate the castle.

One of our favorite places in Riga is a music venue/restaurant called Folkklubs ALA Pagrabs.  Live music every night, and good food – Latvian home cooking at it’s best.  One of our favorite bands was Retro Limited – a fun and energetic group to say the least.  They describe themselves as gypsy jazz.  Clay asked the question –  how do you describe a band that plays, “All Of Me,” “The Mario Brothers Theme Song,” and “Smells Like Team Spirit the same night?  We went to this place 4 times in our 2 weeks stay in Riga.  I think that sums up our experience.  If you go you must have the the traditional Latvian meatballs made according to grandma’s recipe served with baked potatoes and sauteed sauerkraut and a rich onion-tomato cream glaze.   Or, perhaps the traditional battered chicken fillet with mushrooms, caramelized onions, pickled cucumber and goat cheese topping –  served with green pea-potato mash and brown onion cream sauce.  YUM, YUM!

Another favorite was the Motor Museum. This one not only has cars, but plenty of films and interactive displays to keep the non-car buffs entertained: like a bus ride out to the country, where you could sit in a bus and watch a 1950’s landscape roll by, or an ottoman where sitting in front of a race car activated the sounds and vibration of an auto race. The displays start with horse-drawn carts, move on to early bicycles, but quickly get to cars, cars, cars. 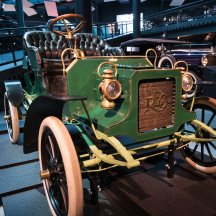 They show the development of the first cars and motorcycles, showing bad ideas, like the 1904 Overland, which was fueled by acetylene – the idea was to get the whole tank replaced every time you went in for a fill-up; or the 1920’s Selve, which went out of business when Mr. Selve ran off with another woman, possibly forgetting that Mrs. Selve was the primary financial backer.

The unique part of this museum was the display of Russian cars, contrasting the simple, boxy cars made for “the people” (not that everybody could buy one) and those for the Communist leadership: mountains of metal, menacing even when they were standing still. 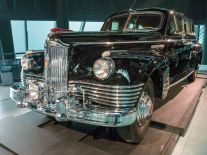 On a related note, they had two BMW 326’s from the 1930’s, one of which had been owned by a man in East Germany who kept it in running order by replacing parts with whatever was available from other cars, trucks and even tractors. Over the years, there was very little left of the original past the BMW logos on the front and back.

We also like the display of cult cars: the Citroën 2CV, East German Trabant, and of course the Volkswagen Beetle. Maggie had to tear me away from the loop of VW TV ads from the 60’s. I remembered every one, and could even say some of them along with the announcer. Very annoying to people around us.

Our last thing to report on from Latvia: the Žanis Lipke Memorial – a tribute to a Latvian man, a smuggler, a non-Jew, who saved at least 50 Jews from extermination during the Nazi occupation of Latvia. He built a hideout for escapees under his shed at home. He then got a job with the Luftwaffe, transporting workers from the Jewish ghetto to the airplane factory in Riga. As he was transferring workers, he would substitute escapees for workers and workers for escapees, and one by one, he, his wife Johanna, their children and other helpers would stash people away into their network of hideouts. The Nazis counted the number of people he brought in and out, but didn’t keep track of their identities, so with trickery and bribes, he was able to distract the guards long enough to make the transfers.

That went on until the Soviet Army recaptured Riga in October 1944. The detained people were free of the Nazis, but Žanis was questioned by the Communists for years. They couldn’t believe that he did all of this for nothing – they kept asking him about the Jewish gold he must have retained as payment. Finally in frustration, he shouted to the Soviet interrogator that  the Communists were the same as the Nazis, except Nazis shoot you while looking you in the eye, but Soviets shoot you in the back. Instead of getting shot himself, he earned the respect of his interrogators, and they never questioned him again.

In the end, Žanis and Johanna and the network saved 50 Jews out of the 400 to 500  Jews who were saved in Latvia, out of the nearly 20,000 who were killed. This was at the cost of several people being captured, questioned and tortured, and at least two members of  the network killed by the Nazis. For that, Žanis was named “Righteous Among the Nations” by the state of Israel, an honor for non-Jews who risked their lives to save Jews during the Holocaust. 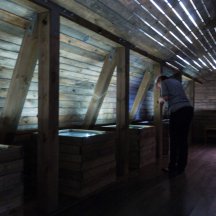 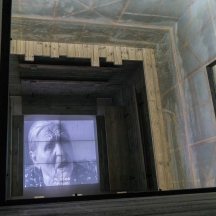 One thought on “Favorite things in Riga”