We finished off our touristy activities with trips to four small museums: the Viking Ship Museum; Historical Museum; Munch Museum; and the Nobel Peace Center. Some of these are on the tour book and TripAdvisor short list of places to see in Oslo, but for one reason or another, they fell to the end of ours. Having seen them, I’d say we were right in some cases, but wrong in others.

The Viking Ship Museum is just that: the remains of three Viking ships that were unearthed and put on display here. They were used for Viking funerals: buried in the mud with their owners, along with the appropriate armor, weapons, jewelry, horses and dogs to see them through the voyage to the afterlife. (Not burned, as legend would have it.) Most of the accoutrements have been stolen by grave robbers over the centuries, so there isn’t much left but the boats themselves and a few hand tools, weapons and a little jewelry that the robbers overlooked.

At the museum, there isn’t much information on the artifacts they do have. We got some insight into the lives of the Vikings from the intricate wooden carvings (which have survived because of the mud blocked out any access to oxygen, so shipworms and other tiny creatures couldn’t get to the wood to chew it up). From the sophistication of the carvings, we go the idea that there was a lot more to the Vikings than the bloodthirsty warriors that we’ve been told. That”s understandable: most of those stories we’ve heard came from the English monks that the Vikings plundered in their raids. We can’t blame the surviving monks for not recording the artistic qualities of the weapons they were threatened with. 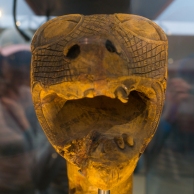 You might think that the Historical Museum would bed filled with Norwegian history, but it’s not. The bottom floor is devoted to an explanation of the causes and effects of global warming – a vitally important subject, but not what we came for. They had a good exhibition of Norwegian art from the Middle Ages, and an exhibit of the Sami people, the indigenous people of the Arctic part of Scandinavia. This part was fascinating. Their lives are so different from ours, it’s like they live on another planet – but in reality, it’s not that far away. The fur coats they wear in the winter were on display, but it didn’t look like enough to us. I don’t think I’d survive five minutes without Gore-Tex® and PolarTec™.

The Munch Museum is devoted to the artwork of Edvard Munch. There are a lot of his paintings here, except for the ones you know about: The Scream, Madonna, Sick Child and the other most famous ones are all at the National Museum. Still, it was interesting to see some of his lesser known work, especially since many of them were unfinished, so we got some insight into Munch’s laborious method: paint, scratch, paint, scrape, paint some more, on and on until he was satisfied. It was also cool to see his sketches – the man could really draw, which is not always obvious in the finished work.

Of these four, the most inspiring is the Nobel Peace Center, devoted to the winners of the Nobel Peace Prize. Reading the words and hearing the stories of people from all walks of life who devoted themselves to peace was truly uplifting: we stood in awe of Martin Luther King, Jr., Fridtjof Nansen, Malala Yousafzai, and Rigoberta Menchú Tum. The list is also heartbreaking, that some of these organizations need to exist at all: the Organization for the Prohibition of Chemical Weapons, the International Campaign to Ban Landmines and Jody Williams, Doctors Without Borders, and many others.

Leaving the exhibit, we longed for the rest of the world to be influenced by the work of these people, so that everyone would realize, in Lincoln’s words, “We are not enemies, but friends. We must not be enemies. Though passion may have strained, it must not break our bonds of affection. The mystic chords of memory will swell when again touched, as surely they will be, by the better angels of our nature.”