Another sunny day, so we rode the train to Holmenkollen to see the ski jump. The size of this thing is hard to comprehend, so here are a few shots to give you some idea.

From the top we got gorgeous 360 degree panoramic views of the city and the Oslo fjord. 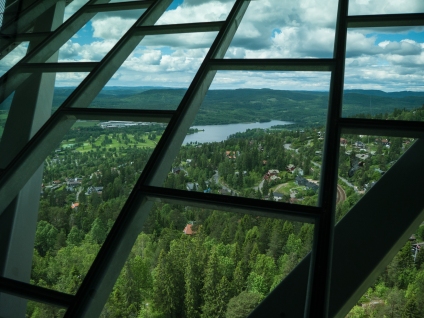 The little town of Holmenkollen is beautiful in itself. There’s an old hotel, an eternal flame of peace, and places to get a cup of coffee and enjoy the view. 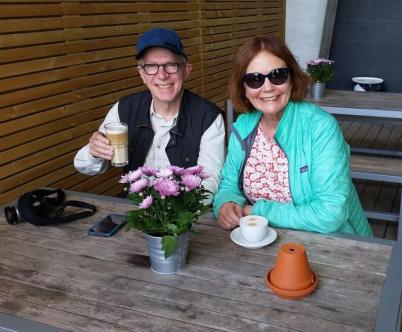 The zip line down the ski jump was closed that day, removing any temptation to ride it. There was a ski jump simulator, but it was one of those pods that they load full of people, then it rocks around while you watch a movie from the POV of the ski jumper – so no thrill of victory or agony of defeat for us.

The ski museum was pretty interesting, even for non-skiers like us. They had remnants of skis that dated to  about 600 CE, plus examples that showed the development of skis through the centuries. As you can imagine, the skis from a couple of hundred years ago were long, heavy and intricately carved. Ski poles were similarly heavy and beautifully carved. Skiers only carried one pole until the beginning of the 20th century, and they were often multi-functional: the handle could be carved into the shape of a drinking cup, or a spear point for hunting bear. The Norwegians are justifiably proud of being the developers of the Telemark ski, which has a concave bottom for greater maneuverability, and of their ski-based army defeating the Swedish army in 1716 and holding off the Nazis in 1940.

All in all a pretty good day – we’re glad that the Scandinavian summer is finally here (the locals said they were still getting snow this May: 20 cm in Oslo in one storm). Today looks really nice. We might even leave our jackets and rain gear behind — for a day, anyway.

A Fine Day Out