Occasionally, you wake up on vacation and realize your plans for the days have to change because of the weather.  That happened to us one rainy morning of our first week in the Cotswolds.  No hiking for the Olmsteads that day.  However, just by chance, while Clay was getting a much needed haircut the day before, his barber told him about the cool village of Snowshill, a short drive from Chipping Camden – our base.  On the spur of the moment we changed gears, and off to Snowshill we went.

We arrived there to find a pretty little village sitting on top of an escarpment with ancient cottages and a pretty 19th century church, and of course a local pub that you find in every English village or city.  However, Snowshill is best known for the 15th to 16th Century Manor house which was bought by Charles Wade in 1919.

Charles Wade (1883-1956) as we learned, was a very eccentric man (even by English standards).  He started collecting as a hobby when he was only 7 years old. A little later, he bought an unopened box for £1, which turned out to contain several complete suits of Samurai armor. He was hooked. Collecting became his passion for a lifetime.  It didn’t hurt that he came from a very wealthy family and had the funds to support his collecting.

His motto was “let nothing perish.”  He collected not for the money or investment, but because of the beauty of the workmanship, design, or color. In the process he gathered up furniture, art objects, musical instruments, bicycles, model ships, toys, baby carriages, suits of armor, spinning and weaving equipment – anything that would fit in the house.

He housed the collection in Snowshill Manor, while he lived in a small cottage in the garden. Every place you find in the manor you find bits of his collection.  It’s hard to capture how many objects there were – over 22,000! Every room has a theme, and many have names: there is a room that’s devoted to bicycles, at least one room for musical instruments, several rooms of ships’ gear that have nautical names; there is a room devoted to the toys he had when he was seven years old, named “Seventh Heaven,” because he thought that was the perfect time of life.

As you might guess, Mr. Wade was unmarried for most of his life. He married Mary McEwan Gore Graham when he was 63 (so you can’t say that she didn’t know what she was getting into). When they were at the manor, they still lived in the cottage, sitting in front of the fire, listening to the battery powered wireless (the cottage had no electricity). Mr. Wade painted (he was actually pretty good, in oils and watercolors) and built models of houses, enough to make several complete small villages.

They slept in the attic of the cottage; Mr. Wade in the medieval curtained box on the left, Mrs. Wade in a room up the stairs, behind the door that you can barely see in the upper right corner of this picture. This room is done up like a church, but the Wades weren’t particularly religious. This is apparently just another quirk. 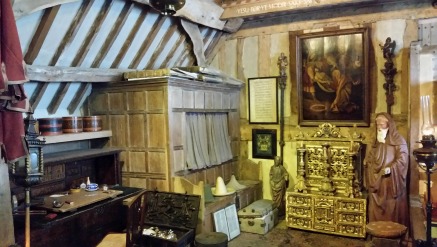 They spent a lot of their time on the Wade family sugar plantations on St. Kitts island, which you can’t blame her for. Before he died in 1956, Mr. Wade gave the estate to the British people, in the care of the National Trust. Mrs. Wade lived on for many years, dying at the age of 99.

Is there a moral to this story? A lesson to be learned? Not as far as we can tell, unless it’s about living life as you choose. I suppose we’re following that example, although we are more inclined to get rid of stuff than to collect it. That leaves us free for the next thing – and so our story is

One thought on “Charles Wade’s Manor”