Our first day in the Cotswolds, Maggie and I had one of those magical experiences that you can only find accidentally. After a day of being in buses, planes and cars, we needed to get out and walk. It was getting late in the day, so we set out to just go around in our neighborhood. Taking a sort of random route through our neighborhood, we followed the sound of sheep until we came out into a field, just about an hour before sunset: the Golden Hour. It had been a beautiful Spring day, so the light was especially clear. The rolling fields were overlooked by a church and dotted with ruins, which it turns out were the ruins of a great house destroyed in the English Civil War, about 1645. Now it’s a place where sheep peacefully graze, with no other reminders of the mayhem that once took place here. Nothing to break the stillness but bleat of a lamb or the outcry of an occasional American tourist, overtaken by the beauty and carelessly stepping in sheep flop. 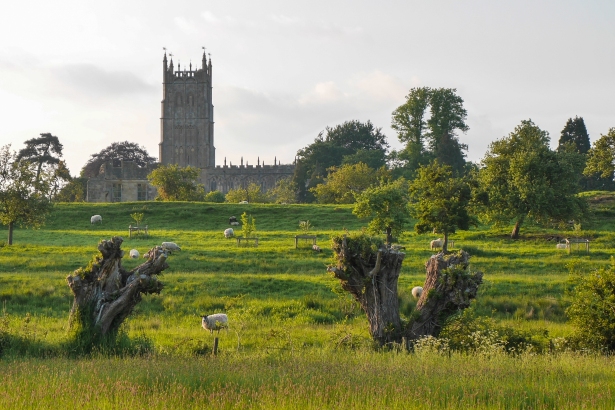 We were walking on a Public Pathway, part of a network of walking paths that crisscross England. The trails are for anyone to use; they cross pastures, fields, and suburban neighborhoods. They are clearly marked and reasonably well maintained. Where a trail crosses a pasture, there’s a “kissing gate” that only lets one person through at a time, so there’s no way a careless hiker could leave the gate open and let the animals out. 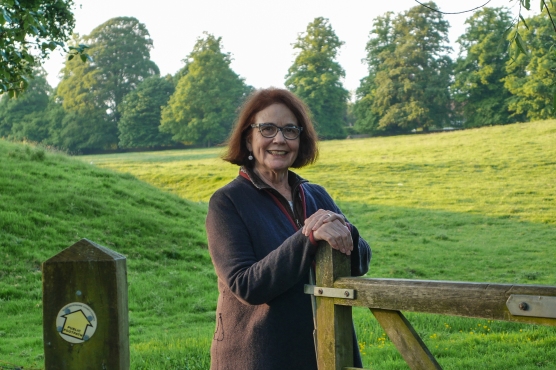 This pathway is part of the Cotswold Way, which goes from Chipping Campden to Bath, about 100 miles south. if you hiked the whole thing, I don’t think there are places to camp out; you’re more likely to spend the night in a room over a pub. That sounds like the way to go. No hauling a tent, canteen and sleeping bag everywhere you go; you get a comfy bed, a cool glass of beer and some warm conversation.

I’ve been on a personal research project to see what the effect is on people to live in beautiful surroundings. So far I’ve found that the locals are some of the happiest people I’ve ever met. Nobody is in a hurry, nobody is phased by life’s little tragedies. When the water was accidentally cut off by a construction project, none of our neighbors seemed to mind. The general feeling was that it would be back on in a couple of hours, there was no need for concern. If you can’t wash dishes or take a shower, then take a walk, plant some flowers.

Speaking of flowers – you can tell this is a great place for growing things, because nearly everybody with a little space has filled it with flowers. Growing up, we had the California Poppy, that shows its little golden face when there’s been a rainstorm. Here, the roads are lined with poppies you could stick your whole face into. The sight would make an Afghan farmer weep. 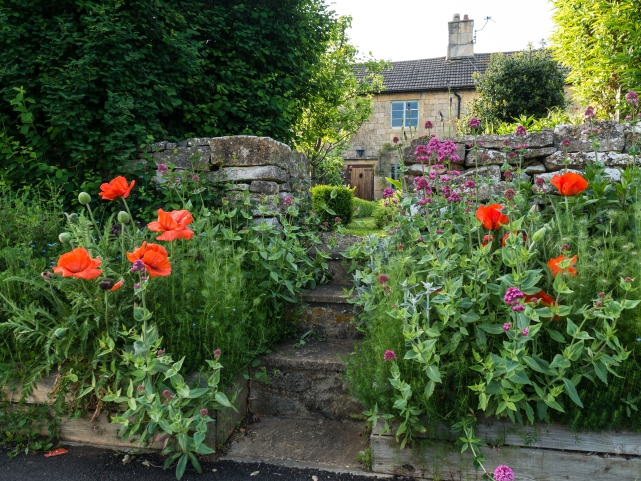 We paid for those flowers with a couple of cool rainy days, but according to the weather predictions,  that’s all over with and we’re in for a few warm, sunny days. That’s a good thing, because we want to get back out on the trail. We can’t wait to experience more of this miraculous countryside.