Here are some random observations we’ve had in our first week in Estonia.

There isn’t the same level of customer service here that there is in the U.S. That’s not just our observation. In the essay, “100 ways to know that you are from Estonia,” Number 22 is, “You are used to customer servants looking at you as if they wanted to give you a good slap.” Maggie and I haven’t really seen that. We’ve found a couple of examples, all older people: an old guy who worked in the tourist office told us that there were no ferries leaving from Tallinn to St. Petersburg – we found out on our own that the ferry goes from Tallinn to Helsinki, then St. Petersburg and back to Tallinn, but that apparently was too much trouble for him to explain. The woman at the information desk in the Peter the Great house had an answer for everything: NO. There was no map of the museum, no free lockers and no, she wouldn’t give us change for a €5.

Other than that, everybody has been friendly, welcoming and able to deal with our utter inability to speak Estonian. We’ve had several conversations with waiters, baristas, and vendors on the street. For the most part, even if their English is limited or non-existent, they smile and at least try to communicate. We talked about the very informative waitress in an earlier post. There was a young man in the ferry terminal who asked if there was anything we wanted to know. I looked at the enormous hickey on his neck and wanted to ask if it wasn’t wonderful to be young and good-looking, but just said no, we were OK.

First of all – do not even think about having a car here!  Getting around old town is primarily best on foot except for the delivery trucks and cabs, and a few adventuresome souls.  The bus/tram system is easy to use and cheap.  It costs 6 euros for a 5 day pass which you only  have to “tap on” once.  Getting to Tallinn from Helsinki on the Viking Ferry was only 37 euros each.  Just booked our bus from Tallinn to our next stop (Riga, Latvia), and it was only €9.80 (about $11) each.  Be warned that it will be slightly more for you “younguns,” because Clay and I get the pensioner’s price.  That trusty old map is getting lots of use. 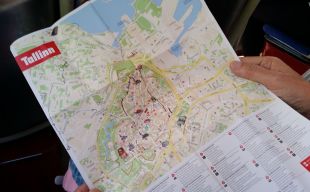 There is even a “driverless” minibus that just started this year.  Neither Clay nor I have felt a need to check it out.  Regardless, Estonia is miles ahead of most large US cities with mass transportation.

The quality of the restaurants we have tried in Tallinn have been outstanding.  We have been very pleased with our trips to local places.  Below are some of our favorite meals…..so far.  Will be adding more since we have another week here in Tallinn.  Also, it is cheaper to eat out here than in Austin, so no complaints from us. 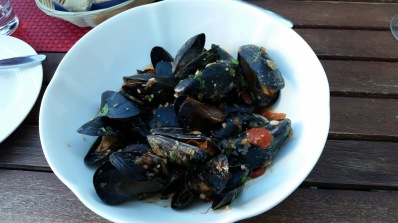 Another bargain here are the buffet lunches.  We just happened to walk by a local restaurant, and noticed the buffet lunch sign, and could not believe the price of €4.75 (all you can eat, too).  In we went to investigate, and it was great food at moderate prices.  Clay had the salmon, which is always good here in the Baltic region, and I had a vegetarian dish (stuffed eggplant) which was delicious.  Lunch for less than €10.00! 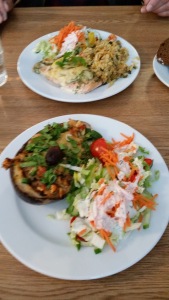 Grocery store prices are very low compared to U.S. prices.  However, compared to Sweden, Norway, and Finland, it is much cheaper in Tallinn.  Nice to have a few weeks in the Baltic region to compensate for our spending on our first stops.  I have included a few photos from our local farmer’s market for comparison.  Take that, Whole Foods!

The prices for the berries are in Euros/kilogram, so dividing by two gives you the price in dollars per pound.

Various subjects – all about Tallinn