Hungary has a rich and varied wine culture.Wine production suffered from two world wars and Communist mismanagement, but now it’s springing back into its own. There are several varieties of wine, each with its own unique flavor. Today the biggest problem with Hungarian wines is not their taste, quality or price, but with distribution. For various reasons, they’re not available all over the world like the wines of Chile or Australia. You have to come here to try them, so it’s kind of like finding a buried treasure.

The most famous is Tokaj, which are  grown in north east Hungary, near the Slovakian border. They are usually sweet white wines, but there some dry vintages now as well. Tokaj wine is so identified with Hungary that the wine is actually mentioned in the National Anthem, thanking God that,”into the vineyards of Tokaj you dripped sweet nectar.”

Hungarian Rosés are very good. We like dry wines, so we’ve learned to look for the word száraz (dry) on the label. Our friends Drema and Judy taught us to look for the “gray” color, not the radioactive pink that some rosés have. We’ve also learned not to get distracted seeing legjobb on the label. It sounds like something that would seem like a good idea after drinking a bottle of wine, but it just means “best.”

For Maggie and me, the legjobb is Egri Bikavér, otherwise known as Bull’s Blood. It’s a rich, hearty száraz red wine with a legend behind it. (There – you’re speaking a little Magyar already. Don’t worry, there won’t be a test.) In 1552, during Hungary’s wars with the Ottoman Empire, about 2000 men and women held off an army of Turkish invaders at the castle of Eger. The defenders fortified themselves with the local wine; seeing the men’s red-stained beards, the story among the Turks was that they had gotten their strength from drinking the blood of bulls. (That sounds like the kind of story you’d make up if you’d just lost a fight you should have won.) The Ottoman army eventually returned, defeated the castle and ruled the region for nearly 100 years, but a legend was born. 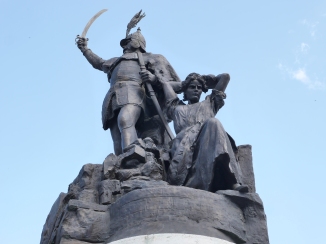 Better picture of the rocks the woman is throwing

You can find all of these at local wine stores, but it’s more fun to go out to an area where 48 local wineries each have a little shop, dug out of caves in the side of a hill: Szépasszonyvölgy, “The Valley of Beautiful Women.” Outside the caves, there are tables set up, food stalls, games for the kids, and at night there are bands and strolling musicians – although we were there on Sunday morning , so you’ll have to go for yourself if you want to know more about that.

Besides Maggie, I didn’t see that many beautiful women. Either they come out at night too, or it’s a case of “wine goggles.” There’s no way for us to be sure.

In the Valley of Beautiful Women