Yesterday was one of those unplanned days that are the benefit of staying in one place for more than a couple of days. Not having an agenda, we set out to figure out the bus system and make reservations at Paprika, a restaurant that’s across town from our apartment. We could have made the reservation over the phone, of course, but we needed to try out our new metro passes.

But first, breakfast: we stopped by New York Bagels, which is right around the corner from our apartment, and while eating had a conversation with some young travelers, one of whom was Irish. He gave us his view on how to see his home country best: spend a few days in Dublin, then hire a car and drive around the island along or near the coast. That’s an interesting idea that we hadn’t thought of – we have some time to work on it, but that’s a good starting point.

We had our brand new 30-day metro passes, which had been surprisingly easy to get. If you research this online, you’ll through multiple web sites with partial explanations of how to get a pass that’s good for more than 72 hours. We had been told that the ticket sellers only spoke Hungarian, the 30-day pass was only for Budapest residents, and all sorts of other lugubrious stories. We tried it out anyway, and discovered that all you have to do is go to the ticket office in a main metro station and ask for one. Their English is a little rough – you have to speak slowly and clearly – but if you smile a lot, say “good morning” and let them go through their mysterious procedure, it’s easy.

We found the nearest the right bus route and nearest bus stop using a combination of the Budapest metro’s Android app and Google maps, waited 10 minutes to catch our bus, and were at our destination in about 15 minutes. (It would have been faster to take the subway, but the view is better on the bus.) We walked about a half mile along a park, found the restaurant (which is beautiful – more on that later) and made our reservations.

On the way back, we decided to walk back to the bus stop through the park instead of back along city streets. It turns out that the restaurant is across from Városliget (Budapest City Park), which is home to miles of walking and biking trails, two art museums, thermal baths, a zoo, a circus, a castle, flower gardens, a lake and Hero’s Square – a UNESCO World Heritage site that’s a  monument to the history of Hungary. 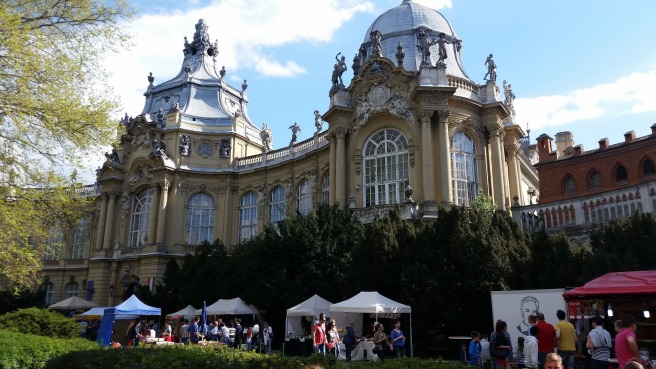 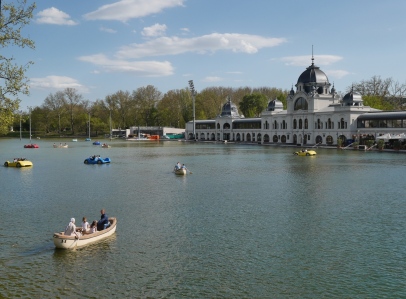 Boating on the lake

Unfortunately, we needed to get back in time for a performance of Hungarian folk music that night, so we only had time for a pretty quick stroll around the park. We decided to come back on Wednesday so we could spend the day before dinner at Paprika.