The Algarve is the southern coast of Portugal, where the best beaches and resorts are scattered along the coast, between the lush green hills and brilliant blue water. It’s been on Maggie’s list of magical destinations for a long time – since her days of tearing her hair out working for Harris in Florida. It’s not just the beach; the Algarve has a mystical attraction of being shielded from the daily struggle to scratch out your place in this world. 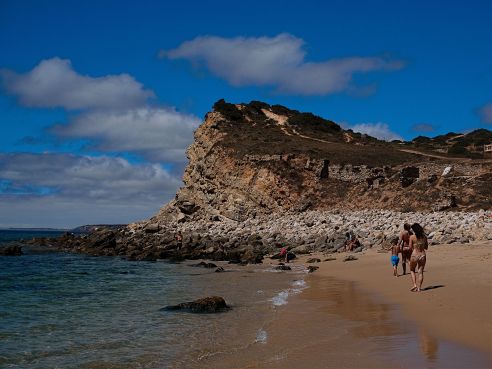 We finally made it there, and the Algarve did not disappoint. Even a couple of retirees like us could appreciate the vibe of a place that’s all about relaxation. The ocean and beaches are there, alongside the old world charm of castles and villas, all as beautiful as expected. We took an all day van tour from Viator (Western Algarve Small-Group Day Trip to Sagres, Lagos and Silves). Tiago, our tour guide, gave us insights into Portuguese history and culture that you just can get out of reading tour books.

We liked Faro a lot: the town itself is pretty small and fairly quiet: there’s no beach scene, since the coastline is mostly taken up by a natural park and bird sanctuary. There was live music everywhere: rock, jazz, singer/songwriter, even a festival of African music; In Lisbon, we had gotten to think that Portuguese music was all about Fado. We like Fado, but we were still glad to see that there’s more kinds of music here.

For a cool city with nice beaches, restaurants and night life, Lagos is the place to be. From Lagos, we took a boat trip to the Ponta da Piedade, where there are cliffs, caves, grottoes, and little pocket beaches to explore. The boat driver really knew his stuff, whirling around a point and flying right up to the mouth of a cave before bringing the boat to a full stop and motoring gently inside. He wanted to make sure that we saw each and every rock or bump that somebody thought resembled a camel, and elephant or Michael Jackson. That was fun at first, but I just wanted to take the pictures that I wanted, so I started ignoring him. He apparently thought that I had gone blind or stupid, interrupting his patter to say, “Sir! Sir! Do you see the camel? [Yeah, yeah I see it – now if that sailboat will just come out from behind that rock..] NO, THERE! TO THE LEFT! [OK OK, I’ll take a quick glance to the left and wave at him..] NO, FARTHER TO THE LEFT! Now I would feel bad about being the idiot holding up the tour, so I would put down the camera, look farther to the left, see the camel, point, and let him  motor on to the next sight and repeat the whole process. There were fewer interruptions as the tour went on; either because I got better at faking it, or he gave up on the stupid American, I don’t know which – but it worked out for everybody and we all had fun.

At the western end of the Algarve is Sagres: the most southwestern point in Europe. It’s beautiful and the scenery is dramatic, but unfortunately shrouded by fog while we were there. The thing to do there is to watch the sun set, but for that you really need a car and be able to plan your trip for a clear evening – which we had neither, so we made the best of it while we were there.

Our only regret for the Algarve is not staying long enough. Who knows – we may be back some day. Maggie and I both certainly hope so.

2 thoughts on “The Algarve”